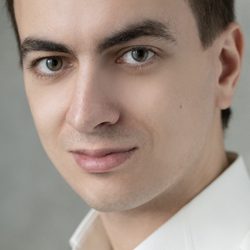 Yevgeni Galanov debuted in 1998 in the concert of the best students of the new generation at the Great Hall of the Belarus State Philharmonic. A year earlier, at the age of 6, he started his musical career at the prestigious Belarusian State Academy under the direction of Professor I. Semeniako.

A very young student, he won the most important competitions in Belarus, Russia and Ukraine. At the age of 17 he won his first international competition in Russia, followed by a series of concerts. In 2003 he made his debut with the Symphony Orchestra of the Belarusian Philharmonic at the “Savoie” festival in Courchevel (France). He would have been invited again to perform Mendelssohn and Rachmaninov in the following years.

He took part in several projects with the Rostov Musical Theater Orchestra (Russia), the Belarusian State Radio and Television Orchestra, the Belgorod State Orchestra (Russia). Due to his success, the President of Belarusian Republic gave Yevgeni the honor of being chosen as a scholarship holder of the Special Foundation for the Support of Young and Talented musicians. A year later he won the special prize of the same foundation.

Thanks to the project “The United State Russia and Belarus” he attended several master classes with professors of the best pre-accademic musical institution in Moscow (the “Central Music School”) and he took part in the “Y.Bashmet Festival” in Minsk. His interest and passion for chamber music led him to join a quintet of young musicians to experiment with some of the most important works of the chamber music repertoire: the quintets of R. Schumann, J. Brahms, C. Franck and D. Schostakovich.

Shortly after starting his studies at the Belarusian State Academy in the class of prof. Liudmila Shelomentseva, he won the first prize at the Minsk 2010, the most important international piano competitions in Belarus, and at the Competition of St. Moniushko – soloists with orchestra. A special experience for his training was the three-week marathon master class organized by Texas Christian University for a narrow selection of pianists from all over the world. In this circumstance he had the opportunity to work with renowned artists (M. Pressler, J. Fegali, B. Goetzke and T. Ungar) in the context of the “Van Cliburn Piano Competition ” in Forth Worth (2013).

In 2014 Yevgeni moved to Italy, where he started a new musical adventure with D. Cabassi at the “C. Monteverdi Conservatory” in Bolzano and then at the “Conservatorio G. Nicolini” in Piacenza, where he graduated with the highest score and special mention in 2016. He is currently attending a Master’s degree at the same conservatory to complete his education.

J.S. Bach: Capriccio on the departure of a beloved brother, BWV 992